A dark Icelandic lullaby in Sönghellir

The perfect location for this song is in a cave called Sönghellir (The Cave of singing) by the Snæfellsnesjökull glacier.

Jóhann Sigurjónsson wrote this song for a play he wrote about the famous outlaw Fjalla-Eyvindur in 1911. Today it’s a very popular lullaby in Iceland, which is ironic because of the dark nature of the story behind the song.

Halla, the woman of outlaw Fjalla Eyvindur’s life, is singing their baby to sleep, after which she throws the child into a waterfall. The reason was that the sheriff and their men were close to catching the outlaws, and Halla did not want her child to be taken from her. Lovely tragic lullaby, right.

Sönghellir (The Cave of singing)

The walls of the Cave of singing are covered in names, runes, and even signs of sorcery, and some say that Bárður Snæfellsás (The Guardian of Snæfellsnes) sometimes used it for shelter.

To find the Cave follow road no. 574 leading to Arnarstapi and then follow no. 570 leading up the Snaefellsjokull glacier. It’s a narrow, winding gravel road. There are a couple of signs saying Sönghellir on the way, but after a few kilometres of slow driving, the road will take you to a small parking spot. From there, it’s a short walk up to the Cave. The entrance is marked with a little sign making it easier to find. It’s a pretty small opening into a chamber that maybe 15-20 people could fit into.

You can find the location of the Cave on the Google map link down below.

Sleep, my little love.
The rain is weeping.
Mother watches over your gold,
old leg bones, and a little treasure chest.
We shall not stay awake on dark nights.

There is much that darkness knows;
my mind is heavy.
Often I’ve seen the black sand
scorching green meadows.
In the glacier rumbles, deadly-deep cracks.

Sleep well, sleep tight;
it’s best to wake up late.
Hardship will teach you soon,
While the day turns into night,
That people love, lose, cry, and mourn.

The lyrics in Icelandic

The location of Sönghellir (The Cave of singing)

Singing on the Private Tours in Reykjavik?

If you are lucky, you can possibly hear more Icelandic songs when we do our Reykjavik private tours. We can’t promise anything, but maybe if you make a special request for a song, we can try to oblige :). We sometimes include a dark song or two on our Reykjavik Folklore Walking Tour and also the private Reykjavik Folklore walking tour. 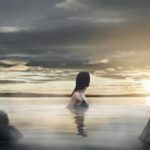 Sky Lagoon – The Newest Spa in the Capital Area
May 24, 2022Helga Dís Björgúlfsdóttir 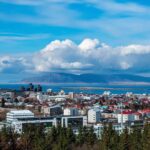