Hop on Hop Off and the Wonders of Iceland

When you book with an account, you will be able to track your payment status, track the confirmation and you can also rate the tour after you finished the tour.
Sign Up
1838
OverviewWhat's IncludedMore InfoReviews

In this combo, you get a ticket to the Reykjavik City Sightseeing Hop-On Hop-Off bus and admission to The Wonders of Iceland exhibition in Perlan.

The Reykjavik City Sightseeing Hop-On Hop-Off tour bus allows you to explore Reykjavik in your leisure time. With 16 stops on the way, you can hop on and off at your convenience. Reykjavik is a city that boasts the best of two worlds; it is a modern and trendy city while simultaneously being extremely close to unspoiled nature.

One of the stops on the 60-minute route is Perlan at the top of Öskjuhlíð. Perlan houses the Wonders of Iceland exhibition. It includes a natural man-made ice cave indoors, a presentation on the power of the Earth, a VR of Látrabjarg – Europe’s most giant bird cliff and Water in Iceland. Additionally, there’s an outdoor deck with a 360° view of Reykjavik and the capital area.

The stunning concert hall and conference center is the latest landmark in Reykjavik and houses the Iceland Symphony Orchestra and the Icelandic Opera.

Explore the world of the Icelandic fisheries and coastal culture. The former coast guard vessel Óðinn is also docked there.

The biggest whale exhibition in the world! Life-sized models, an interactive installation, and a virtual reality experience. Fun for all ages.

The permanent exhibition Making of a Nation – Heritage and History in Iceland is a journey through time, from settlement to the present.

Lækjargata – literally stream street – takes its name from the stream that once ran along the road. The famous Hard Rock Café is located on this street.

Strolling down Laugavegur, you will find all kinds of shops, restaurants, cafés, and bars – something for everyone.

It houses the works of one of Iceland´s most influential and recognized artists, Jóhannes Kjarval. You can also enjoy works from other leading Icelandic and foreign artists.

The church spire is 73 m high, thus making this building the tallest in Reykjavik. The view from the tower is sublime.

Home of Reykjavik Excursions and the Flybus. From here, you can join one of the many adventurous day tours heading outside the city or take the Flybus to Keflavík International Airport.

A glass dome was built on top of six hot water tanks. Inside you will find a restaurant, café, and the amazing Wonders of Iceland exhibition. The 360° view from the observation deck is spectacular.

Iceland´s first real shopping mall opened its doors in 1987 and currently includes over 180 shops and restaurants, a cinema, and a public library. Next to the mall is the Reykjavik City Theatre.

The hotel is formerly known as Hotel Esja, a name derived from the dramatically dominating Mt. Esja, which provides a stunning backdrop to the capital.

Reykjavik´s homemakers and housemaids washed laundry in geothermal hot springs here in Laugardalur until the early 20th century. Today the park is home to a swimming pool, sports center, botanical garden, and the Family Park and Zoo.

You can take a boat tour over to Viðey island, stroll along the coastline to downtown Reykjavík or come inside and rent a vehicle for the day at Enterprise rent-a-car. (When cruise ships are in port)

Höfði is considered one of the most historically significant buildings in Reykjavik. It was the location for the 1986 summit meeting of president Ronald Reagan and general secretary Mikhail Gorbachev to try to end the Cold War.

Travelling in a City Sightseeing bus, where you can hop-on and hop-off, is in our opinion one of the best ways to get a feel for a  new city. It is one of the things we always check out in a new city. The Wonders of Iceland exhibition is wonderful for people of every age but especially for people who maybe don’t have time to travel all of Iceland. Just the fact that you can enter a REAL ice-cave (indoors) is worth the ticket! 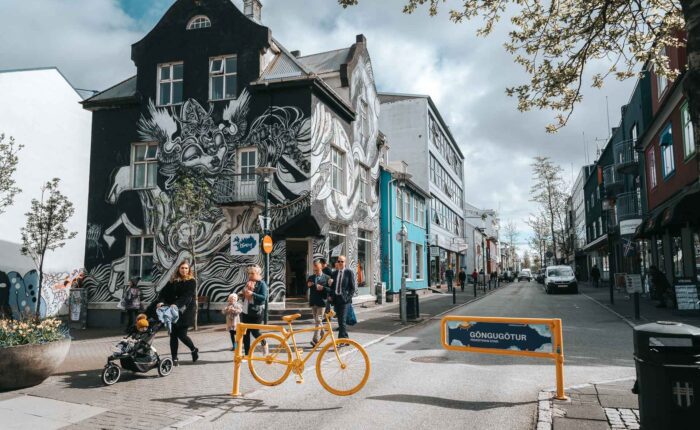