GeoSea in Húsavík is not only a world-class geothermal bathing mecca — it is an experience that taps into the historical roots of a small fishing town in North Iceland that has harnessed the earth’s geothermal waters for centuries. It is a rare union of mineral-rich seawater and heat from the Earth’s core. Perched along a western-facing cliffside that overlooks the Skjálfandi Bay and the Arctic Circle to the north, our baths provide the ultimate vantage point for whale watchers and for those seeking the northern lights. Reconnect, decompress, and enjoy Icelandic nature in a unique way at GeoSea.

There is a long tradition of bathing in Iceland’s geothermal waters. Icelanders have met in hot pools throughout its history to relax and relieve themselves of the day’s hard work. Since its opening, GeoSea has been popular among Icelanders and locals alike. In a way, our sea baths serve as a cultural centre where locals come to discuss the day’s happenings – taking part in a custom that is ingrained in the cultural fabric of Iceland.

You can treat yourself to a refreshing soft drink or alcoholic beverage at our swim-up bar while relaxing in the warm water – a rare luxury in Iceland. We also have a special dining area where you can enjoy refreshments in a cozy bathrobe.

The town of Húsavík sits on the eastern shore of Skjálfandaflói (Shaky Bay), known around the world for its rich wildlife and variety of whales. It is the largest town in Northeast Iceland and a centre of commerce and services. Húsavik is also the site of the first house built in Iceland by Swedish Viking Garðar Svavarsson in the year 860. Located on the town’s northern edge, GeoSea sits at the base of the bright yellow Húsavíkurviti lighthouse. Húsavík is also conveniently located for day trips to most of the major attractions in Iceland. From Húsavík it is less than an hour’s drive to Lake Mývatn, Ásbyrgi Canyon, Krafla Caldera and Goðafoss Falls.

The views from GeoSea over the Skjálfandi bay by Húsavík are exceptional! 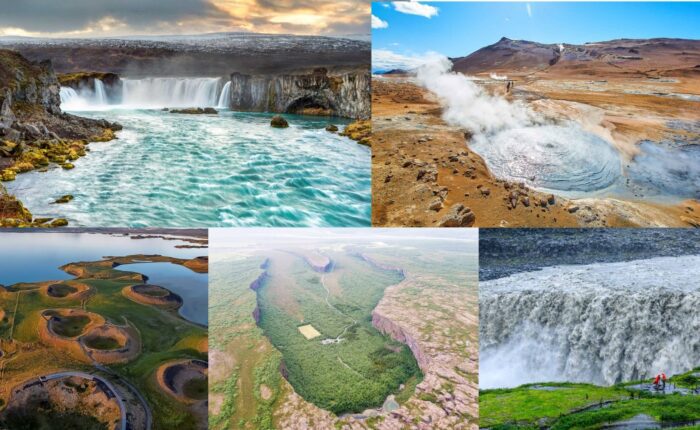